It's Only Been 4 and a Half Years

Hello to anybody who still follows the blog!

Sometime before Christmas, my 15mm buddy and I decided to jump into some WW2, with the intent of trying some Chain Reaction. But then The Mandalorian came out on Disney+ and we were consumed by Star Wars again. I love the new Star Wars minis but could not in good conscience get into that game, So, we dipped back into the 15mm Sci Fi milieu.

While waiting for my minis to arrive, I started working on some terrain. I wanted to go big. 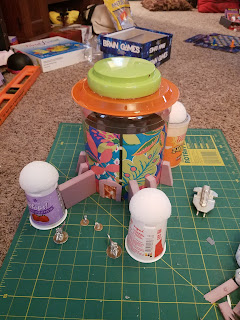 I was going for a Jabba's palace feel. Water jug, plastic plates, yogurt containers, and styrofoam balls. It's huge for 15mm and this pleases me.

And here it is with the other buildings I've finished along the way. Mostly electrical boxes with doodads applied. Most of the buildings just needed a paint job. They'd been sitting in my basement for 5 years or so. 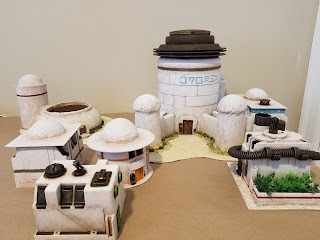 I'll be posting some minis soon.