Since I'm waiting on my Khurasan order to arrive (he said he should start shipping his back log next week) I decided to make a terrain centerpiece for my Greeks. A little googling later I decided on a fairly simple Greek house.

Yesterday I bought a canvas drop cloth and some caulk. I'm going to try my hand at a battle mat to match the arid basingI've used for my Greeks.

Still haven't played a game of Of Gods and Mortals yet but it feels good to get back to the hobby.
Posted by e-p at 7:37 AM 6 comments:

More on the Greeks...

I have never used movement trays before, let alone scratch built them. But Of Gods and Mortals suggests them and, especially for the close order troops, it just makes more sense. OGAM suggests using a compact disc for the open order troops. But that's for 28mm. Much too big for seven 15mm guys. A trip to the craft store got me these nice oval blanks: 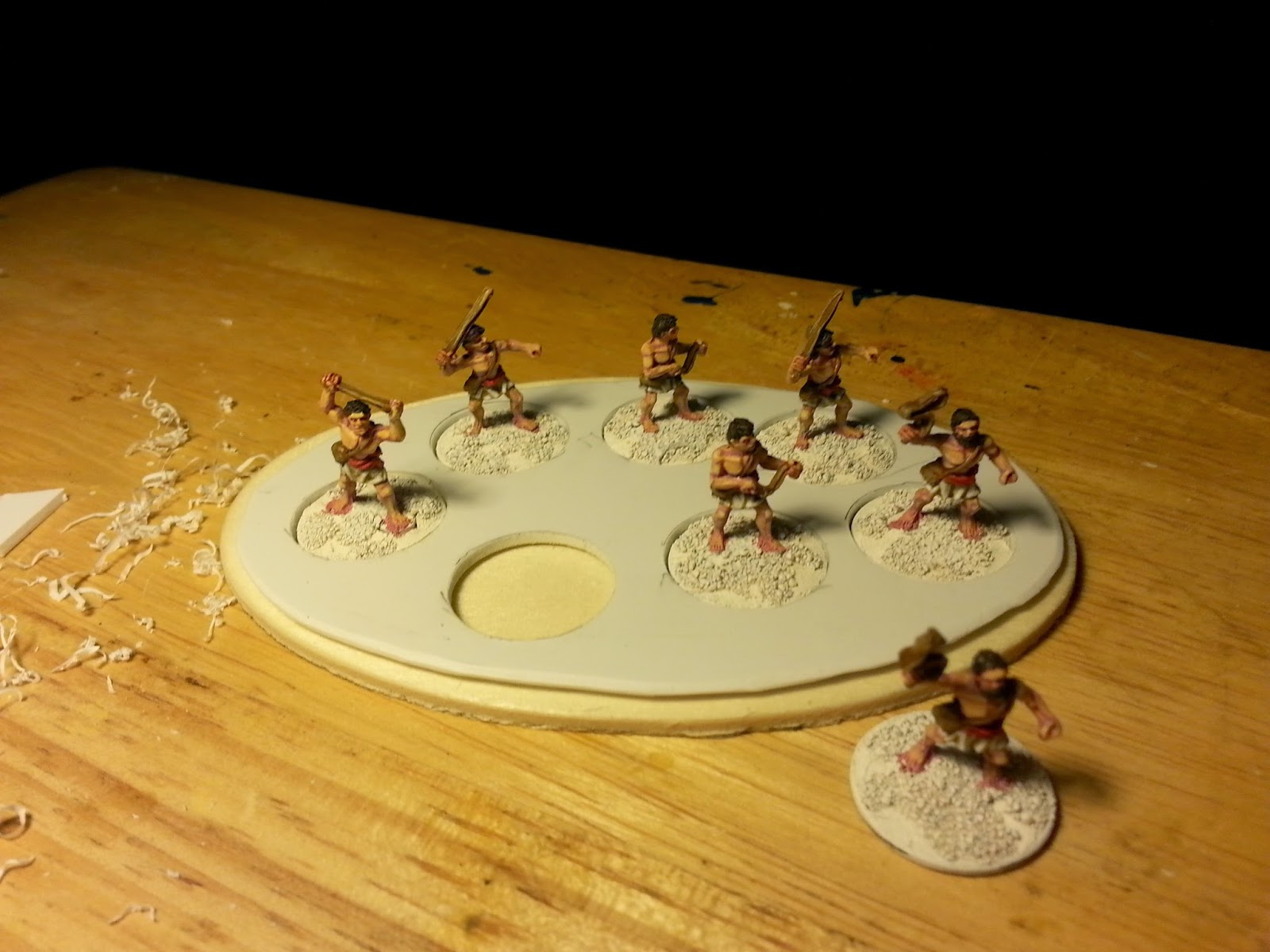 I found plastic card the same thickness as my penny bases, taped it to a board and used a 3/4 inch drill to make the holes. A little spackle and sand later... 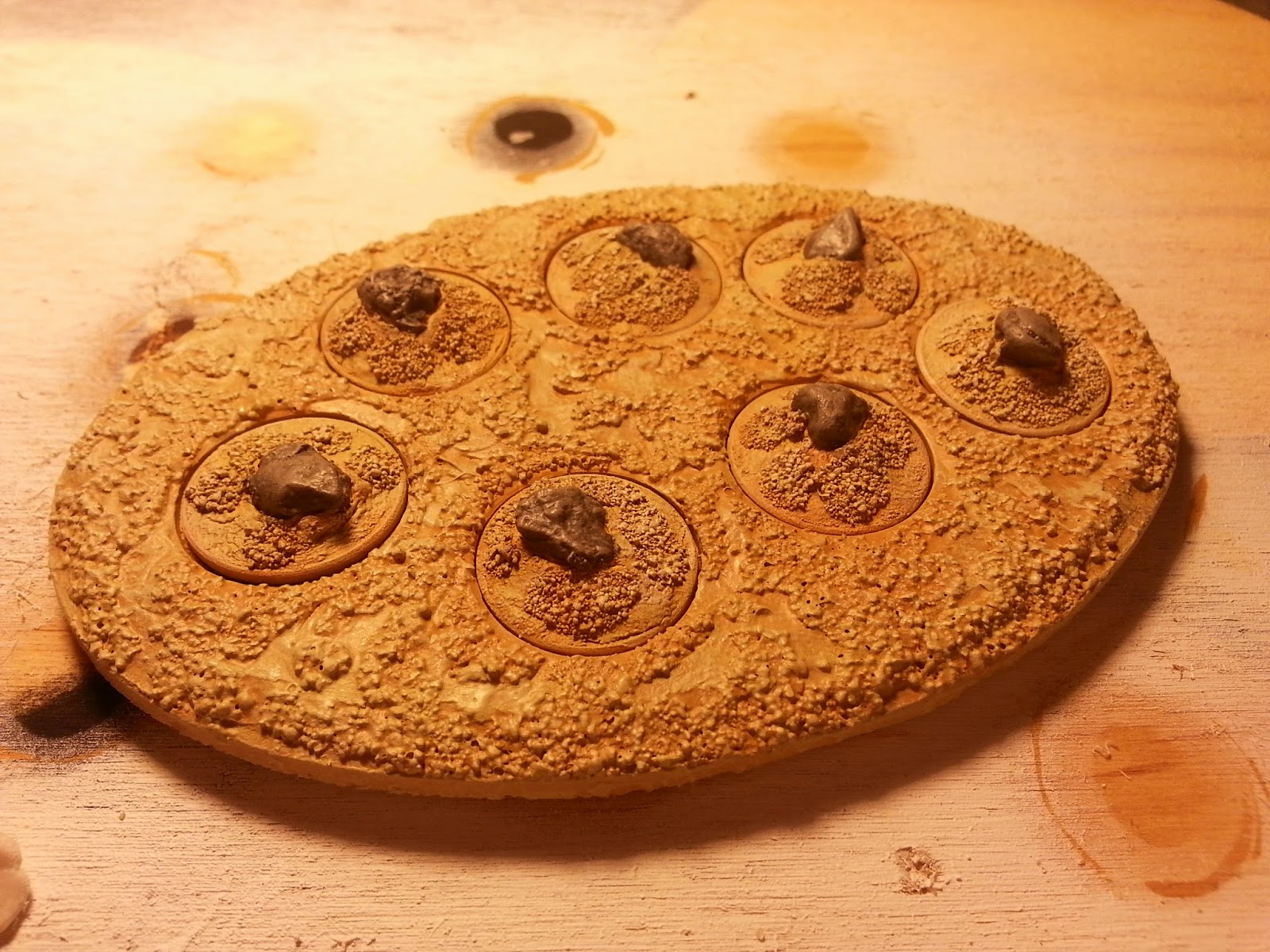 You can see I also made some plugs to fill in for casualties. I made enough plugs to also use as condition markers. Nothing specific, just general reminders about who jas activated.

Here's a few in progress pics of the closed order tray: 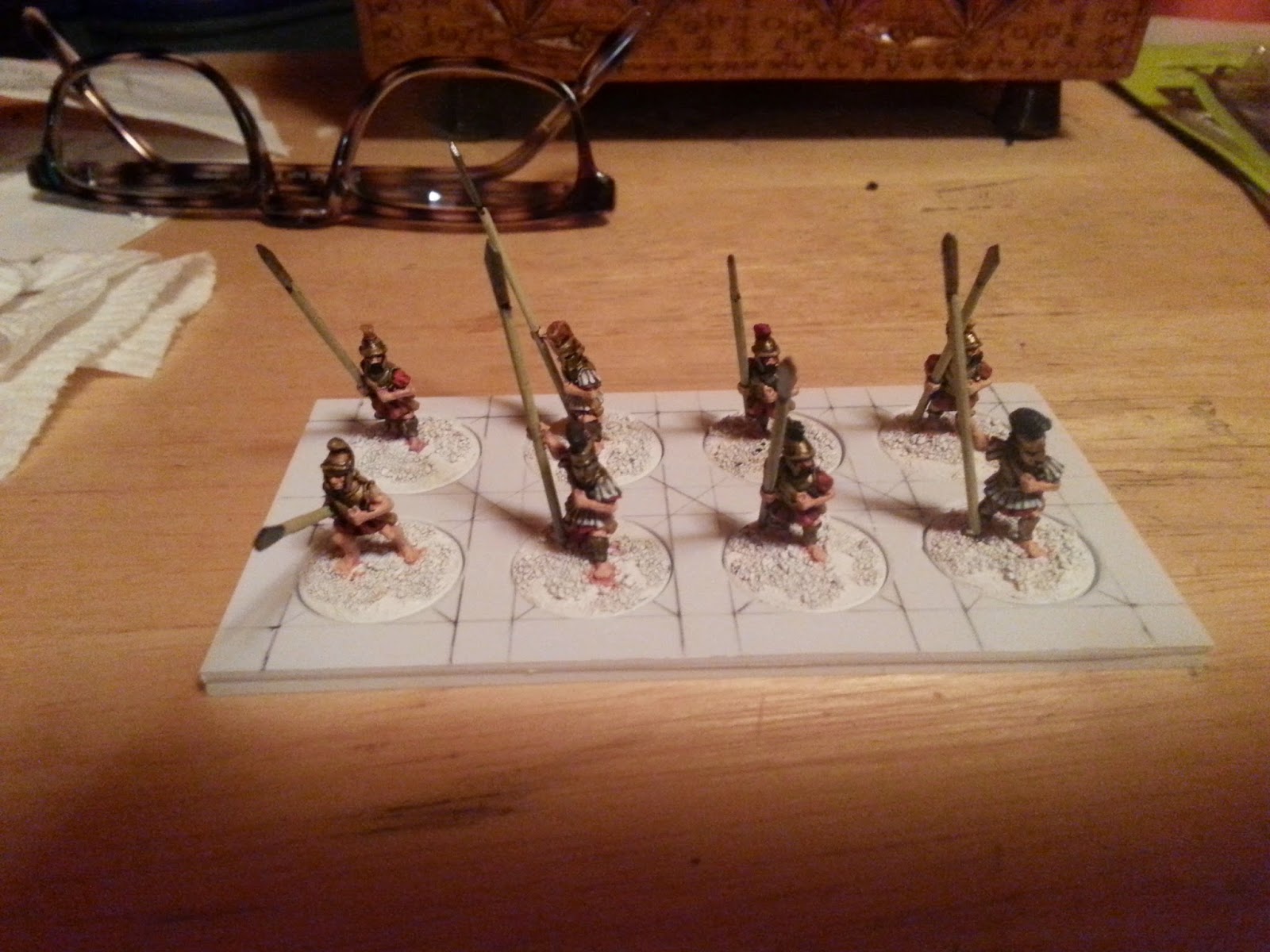 If I had it to do over I would have the hoplites a little closer together but they work for now.

Of Gods and Mortals Greeks!

Well, it's been over a year since I've posted anything. And truth be told, I haven't done much hobby-wise during that time. A friend and I heard the call of Saga, even got some minis but the will and the staying power just wasn't there. They are all sitting on my dresser gathering dust right now. 28mm too. That might be why they languish. 15mm really has gotten it's hooks into me.

So I finally took the plunge and splurged on the rule book for OGAM and a handful of Xyston Greeks. I cannot express how much I love these minis. The are simply beautiful sculpts. I was going to buy some 28mm mini to use as a god by then my daughters found this old (pretty crappy to be honest) GW plastic minotaur on the floor in the basement. Fortune favors the parsimonious I suppose.

So here they are in their phone-pic glory. There's a few shields missing that I need to glue back on. And I was much more pleased with the minotaur's skin tone before spray-coating him. The purple is so much more purple now. Oh well. The warband is done and ready to play. 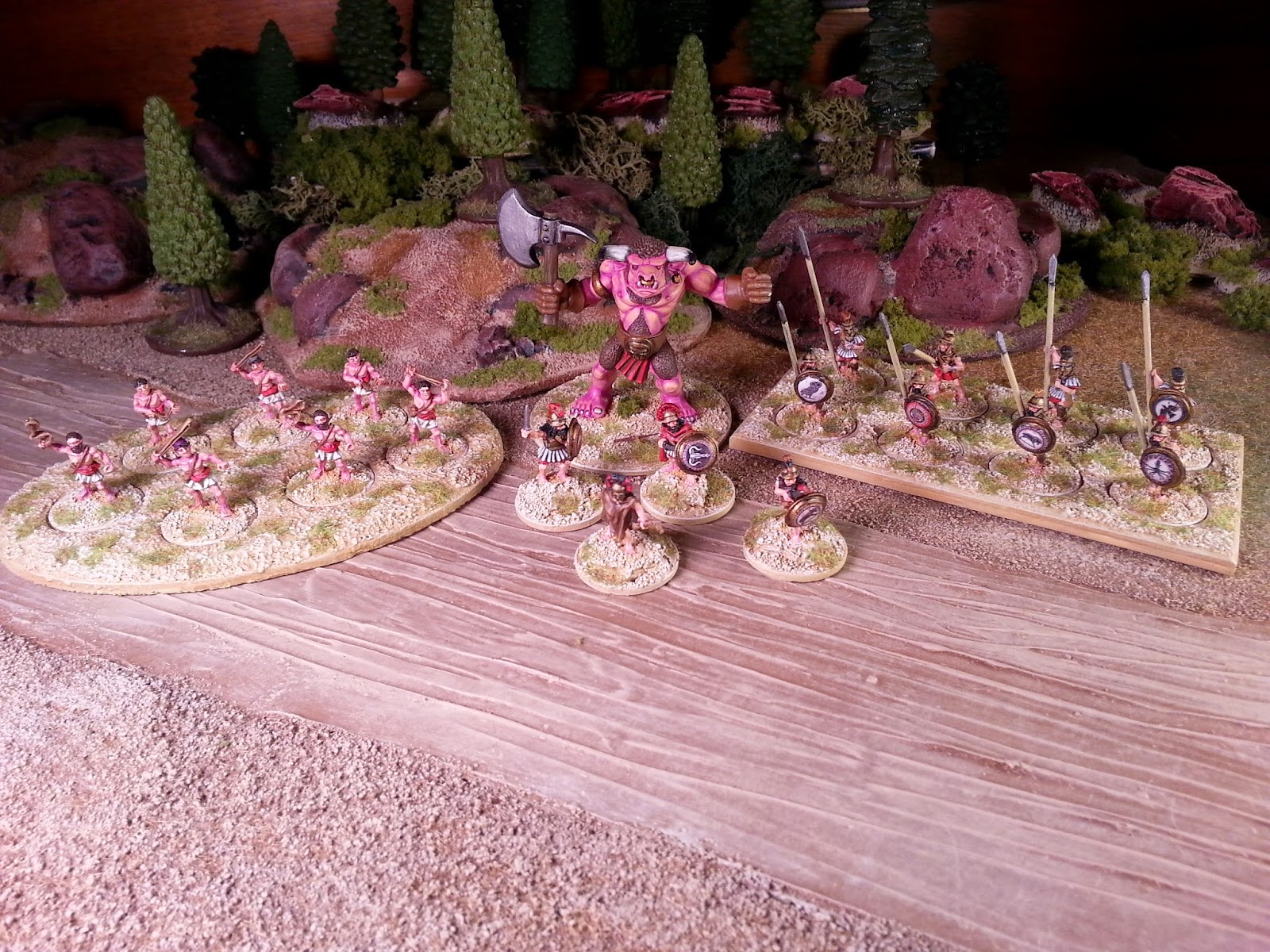 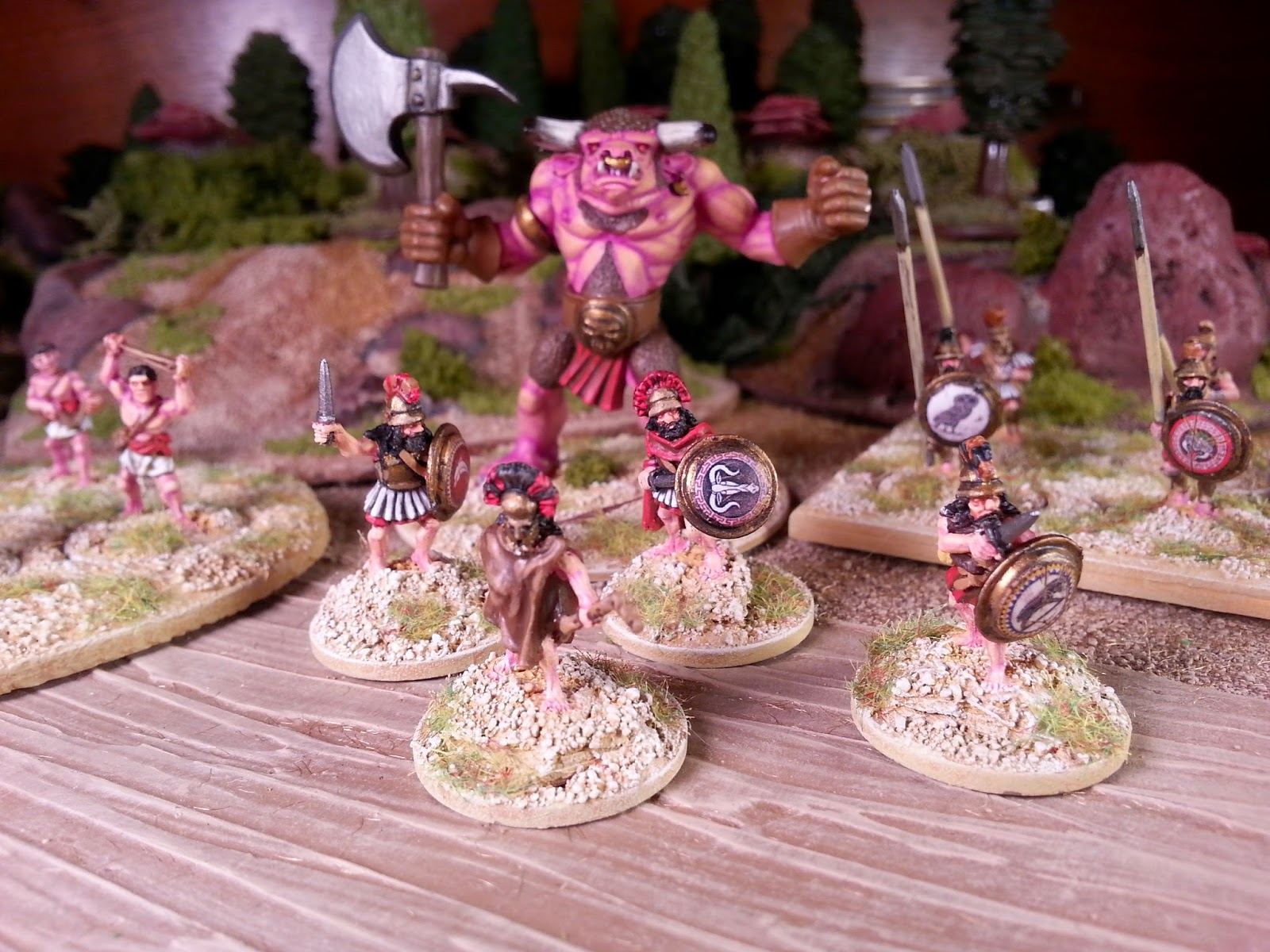 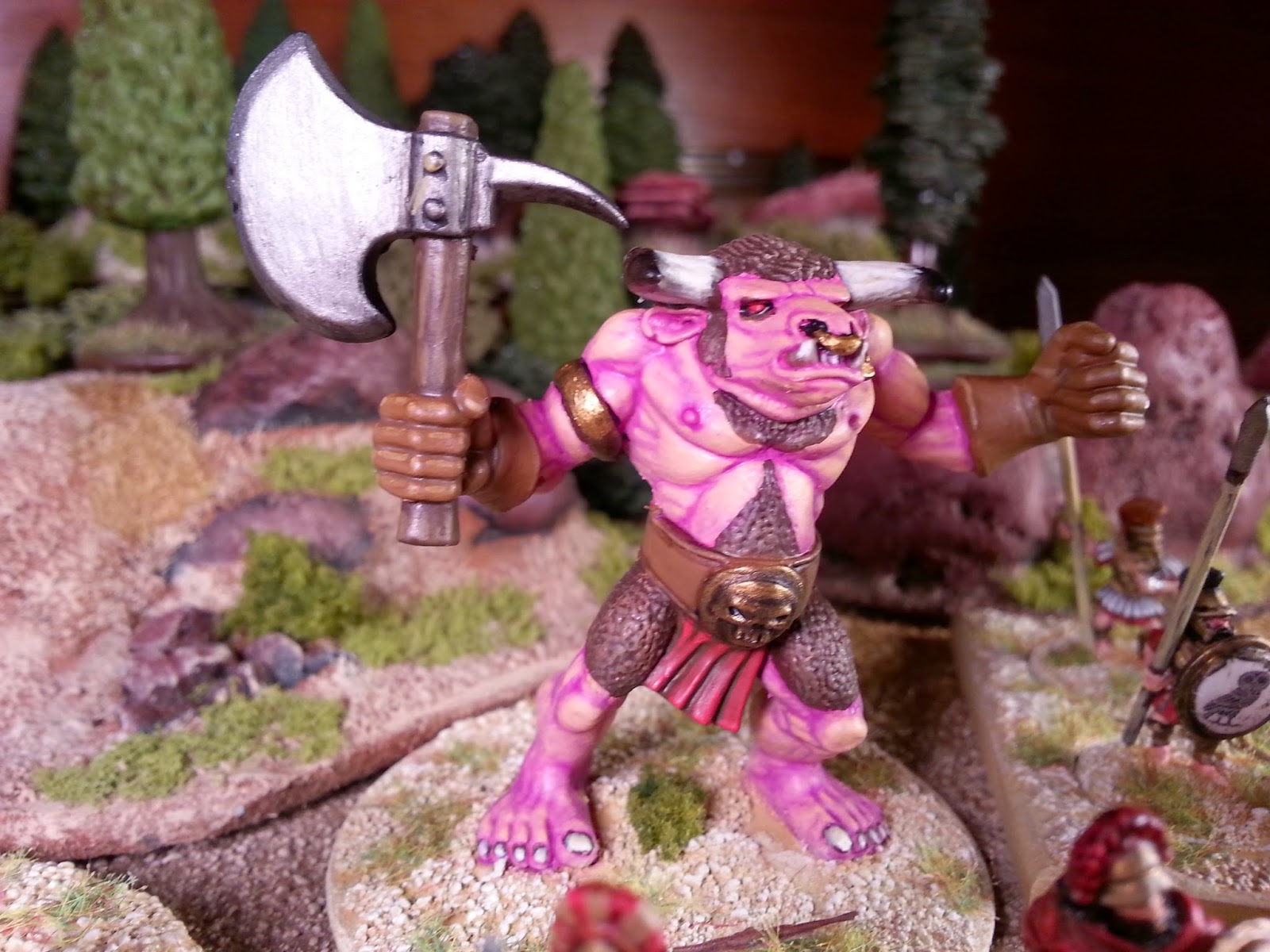 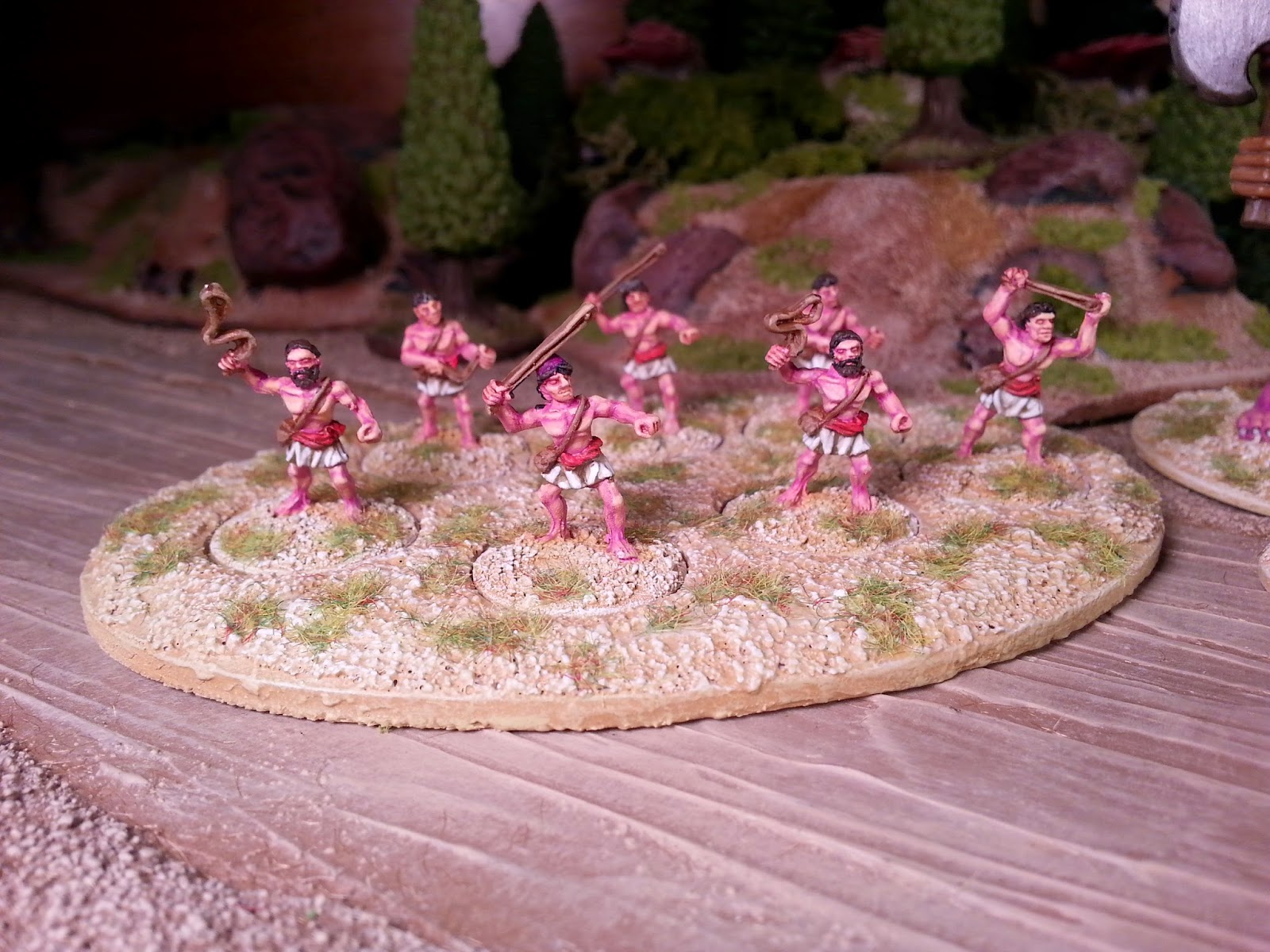 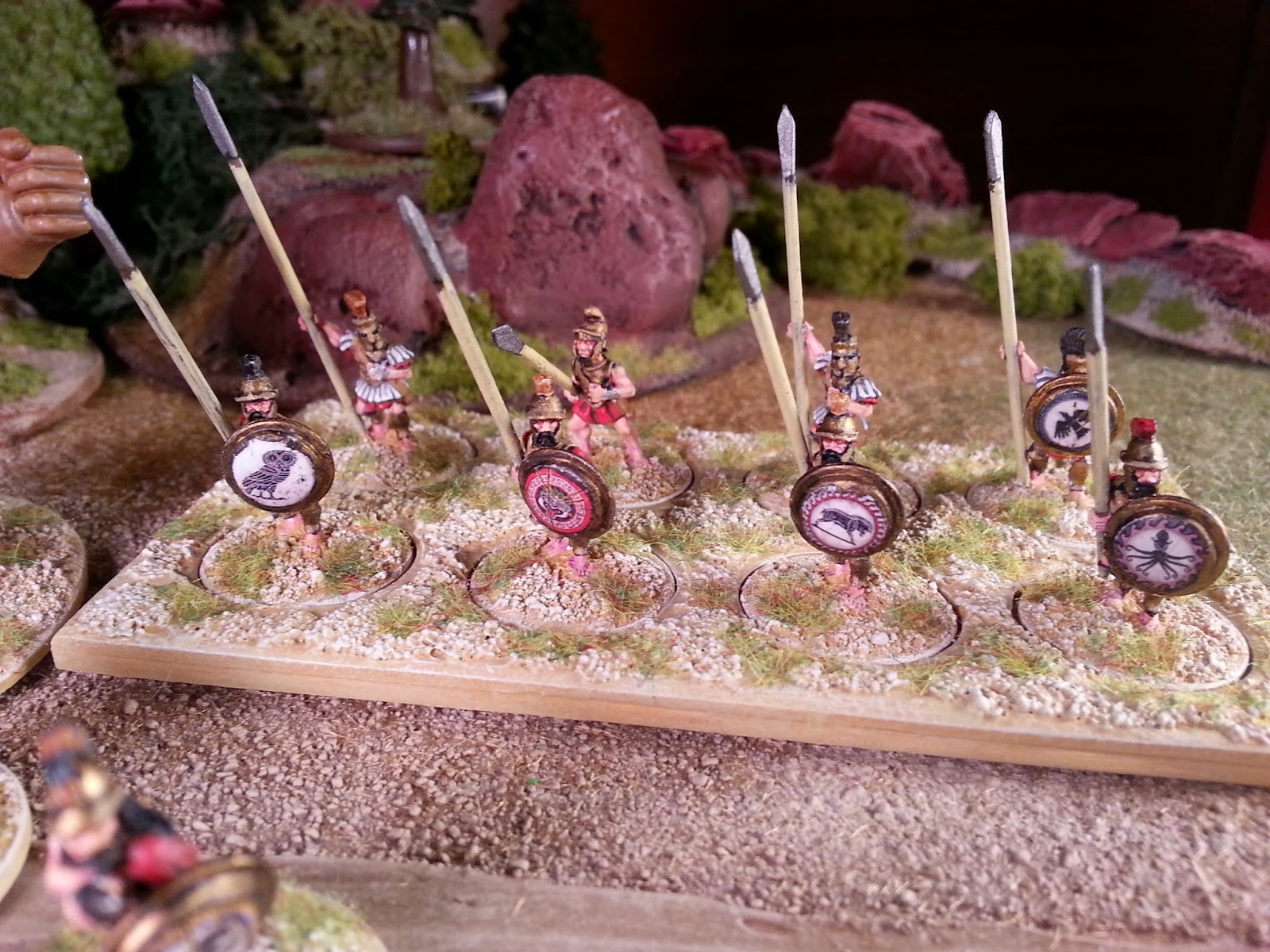 Now I'm waiting on an order from Khurasan for my Cthulhu warband. I have a feeling I'll be waiting a while. My friend ordered some vikings at the beginning of December and didn't get them until after Christmas. Not a huge deal but the waiting is making my eyes wander over toward Japan and a possible samurai warband. Damn you lead addiction.
Posted by e-p at 2:28 PM 5 comments: