Before I get going on the new battle report, I just have to take a second and say, "Wow, the blog has 51 followers!" A sincere thank you to every one who hit the follow button. The geek love is much appreciated!

And now on with the show...

We left our heroes in a tight spot last time. Tasked with blowing up an interplanetary comms bunker on an agriworld, they were lucky to escape with their lives. At least most of them were lucky to escape. After yelling at the driver to go pick up the crew, Barnabas got left behind. He led the fascists on a good chase but in the end those grav drones penned him in a cave and he was captured.

But Barnabas had faith in his friends. Oh sure, he was kinda mean, and frequently rude but they'd come back for him, wouldn't they?

I used the Fear and Faith rules again with a few tweaks and house rules.


I think that's about it.

So. The forces. Cal was once again joined by Gabbie, Boxerbot, and Rx28. Their driver, Dryer, wasn't good in a fight so he was prepping their small shuttle for the jump to space.

The bad guys came in two squads. Five Soldat in the truck transporting Barnabas and five, including a lieutenant, in the bunker. But, unbeknownst to our intrepid heroes, another enemy just happened to be in the neighborhood. When Detlief Konig heard that Barnabas Cooper was captured he knew Cal Middleton couldn't be too far away. Konig couldn't wait to get Middleton in his cross-hairs.


I had a lot of fun. Maybe next time I'll get to use my Cicada.

A couple nights ago both of my girls went to bed at a reasonable time (a minor miracle) so I decided to try a little solo game. I grabbed my Fear and Faith rules and went back to my sci fi team from my very first post. They're a 296 pt force that you can look at here.

Cal Middleton and his smuggler crew picked up a job to destroy a comms bunker on a remote agriplanet. The corporate forces that control the planet are a nasty bunch but Cal and his ship really needed the money.

The bunker was patrolled by the standard laser-armed drones. I used three of these GZG grav drones.

Here's their list. The drones have a fairly low Quality, making activating them a chore. I chose to make their moves random and that strip on top made things really easy. Upon activization the drones move forward in the direction of the stripe. When their move is done, I check to see if any of Cal's crew is within sight (long range). If not, I roll 2d6 (couldn't find a d12) and turn the drone accordingly, ready for its next round. Easy peasy.

The good guys needed to creep through the night to the bunker and plant some explosives. It would take two actions to plant the bomb. The drones would call for some Space Nazi backup if the crew was spotted, but Cal wasn't concerned. This would be an easy job. 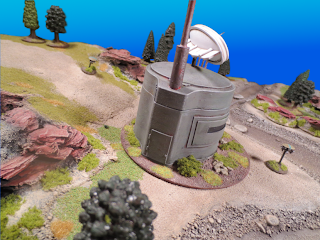 This is only the second solo game of Fear and Faith I have played and I have to say, I need to to this more often! It was really tense and at the end I really thought they were all going to kick the bucket.

It was great to play on that board too. I sunk a lot of work into it and this was the first time I've used it.
Posted by e-p at 7:13 AM 8 comments: