Well, it's been a while since my last post but I have been plugging away at the hobby. I bought about $20 dollars worth of Oddzial Osmy's New Vistula Legion minis a few months ago. I got a few packs of infantry, a pack of SAWs, a pack of NCOs, and the lovely pack of LRRP (this pack was the army's major selling point for me, I just love the scuplts).

Once again I have a crappy camera to take the pics, the decent camera having been almost destroyed somehow (grrrrrr).

The pics of the rest of the infantry were too bad to post. I've got a total of 30 troops right now. I think another $20 worth of figs would do me fine.

I also ordered some Mechwarrior figs because, well, they are incredibly cheap. 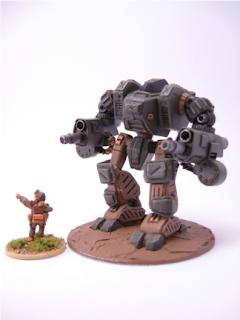 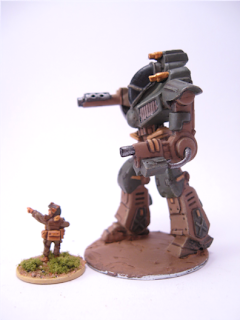 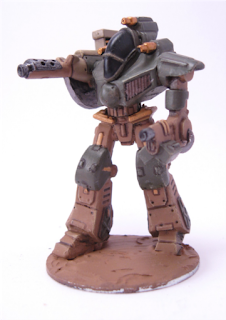 They painted up pretty well. The hard rubber, or whatever it is made of, is obviously not the best material but at about $3 a pop I can forgive a lot.

I got two Heavy Artillery vehicles which I'll be using as autonomous mortar drones and last, but not least, 5 Long Range Missile Batteries. I haven't painted the LRM or the mini-mortar tanks yet because they really have suffered from the crappy hard rubber. The barrels/missiles all need to be straightened to some extant. But, again, for the price I really am willing to put a little extra work in.

I bought the LRM batteries based on idea from a post over on Dropship Horizon. Mark talks about how he never really like mortars in a sci fi game but then goes on to think through how you could make them work. He mentions mortars being deployed by drop tubes. That got me thinking, and that got me looking, and that got me buying.

Right now I'm waiting for my Combat Wombat order. Just a few hover APCs and a hover missile battery. I think this is going to be a fun little army.
Posted by e-p at 9:30 PM 8 comments: