A Game 6 Years in the Making 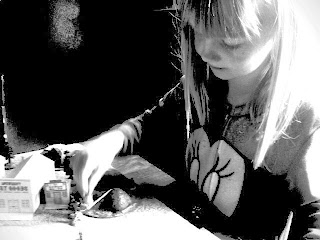 This past Saturday my 6 year old daughter, Gretchen, asked to play a game. She'd asked a few times over the past few months and despite my fear that I would get everything set up and she'd have changed her mind I decided to give it a go.

I gave Gretchen 7 "girl" minis, all from GZG's Spaceship Crew and Ravagers sets. The Not-Inara mini was the prisoner of an evil witch doctor whose 9 zombie guards were patrolling the small town (I used some Whitewash City paper models along with some of my sci-fi shanties and the comm bunker made a good "dungeon").

The rules were inspired by Ganesha Games Song of Blades and Heroes mechanics but considerably simplified. All the minis had a single Skill that could be used for everything. Need to shoot a zombie? Roll and d6 and add your skill. Need to pick a lock? Roll a d6 and add your skill. I gave Gretchen's ladies a skill of 4. The zombies would shuffle along with a 2. We used long match sticks for movement, the ladies could run on there turns using two match sticks but the zombies could not.

I spread the zombies around on the main road through town and Gretchen set up her ladies in a corner where she quickly established all the relationships in her group. There were sisters, cousins, a mom and daughter, and I'm pretty sure a few of them didn't like each other.

After she killed the first two zombies she realized how much tougher her girls were than the zombies and she just knew she had the game in the bag. But then she got within range of the witch doctor who promptly turned one of the ladies into a zombie. Gretchen was gobsmacked. She didn't want to attack the new zombie because that was so and so's sister. But she didn't want orange girl to get eaten either. She solved her problem by concentrating fire on the witch doctor, who dodged many a bullet (much to Gretchen's dismay) but fell in the end. The girl was unzombified, the princess was rescued, and there was much rejoicing.

This was so much fun. I loved how quickly she just made up personalities and backstories for her minis. What would take me a half hour and a whole set of tables to come up with she effortlessly produced within a minute. And the math! This is a great way for her to practice her math! I threw in some plus and minus modifiers on the fly and she worked right through them.

She has now decided that we are doing this every Saturday. That sounds pretty good to me.
Posted by e-p at 9:00 PM 2 comments: