It's taken me a while but I finally got back to my Kra'Vak. I'd done maybe a quarter of my army when my buddy and I got bitten by the Weird West bug. But back in November I got stuck in with my little alien warriors and am now done (for now). The big guys could use some weathering. The little guys could use some squad markings. I have four more mini-mecha I could paint up and add in, but as of right now I need a break from white and turquoise.

The army was purchased with Gruntz in mind. I haven't had a chance to look over the new rules but I believe Robin said there would be a little more flexibility where specialist units come in. I hope that means my mini-mecha will add the oomph I'll need to combat some enemy tanks. If not, well, I guess I'll paint up those other four guys and maybe, just maybe, buy some tanks of my own.

So, without further ado... 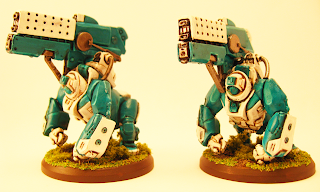 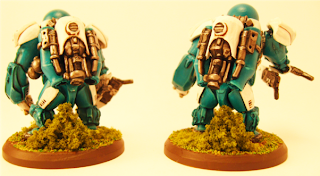 I haven't played a game with these guys yet but my tentative fluff is that each infantry squad has one of the mini mechs assigned to it. Sort of a big brother, watching their backs. That might not be the best strategy-wise but I like the idea of it.

Like I said earlier, I think the big guys need some weathering, probably some paint chipping along the edges to soften up those clean lines, but that can wait for now. I want to work on some more terrain (city stuff most likely) and paint up some of the Match Box stuff I've acquired over the past few months. Mostly it's a bunch of civilian vehicles for objectives and atmosphere; dump trucks, earth movers, that sort of thing. Santa did bring me one of the Fast Freight vehicles for Christmas. It's a sort of ridiculous car/train that would look great as part of a convoy. They come with an "engine" and a single "freight car," but their are couplers so you could conceivably buy as many as you want to make a long train. At $6 a piece, though, I don't think I'll be buying a ton of them.

Anyway, hope you like my Kra'Vak and thanks for looking!