After seeing Spacejacker's Life and Packing Post today, I felt compelled to share my own miniature transport solution.

Step 1: Find a box manly enough to contain the might of my Space Nazi army.

And there you have my Low Class Option. All the figs are dipped and matte sprayed so I'm not overly worried about them. I will confess that I drive a little more carefully when the minis are in the car than when it's just my daughters. Does that make me a horrible person?

Well, my daughter has been making things hard in the hobby department. By the time she finally gets her four year old head to sleep, I've been too tired to get much of anything done. Between that and watching the first two seasons of Luther on Netflix it's been slim pickings in the miniatures department.

So tonight I decided to forget about painting and just get a bunch of GZG stuff based. 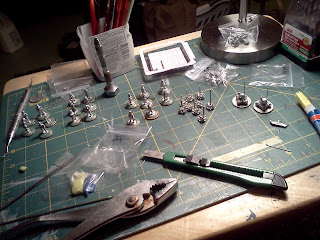 From left, humanoid robots, Not-Firefly crew B, colonial crew/tech, grav drones, and recon bots. Not pictured are both packs of the Not-Reavers that I got mounted on craft sticks ready to prime. I'm using pennies for the most part. The recon bots are on quarters instead of fender washers. The quarters are a decent size and, well, they're only 25 cents a piece.

Not much exciting done but I broke the cycle of inactivity, which was my main goal tonight. Hope you aren't suffering from hobby block.

I bought a pack of Matchbox trucks a few weeks ago.  This one will transport my small adventuring crew and also serve as scenery from time to time. 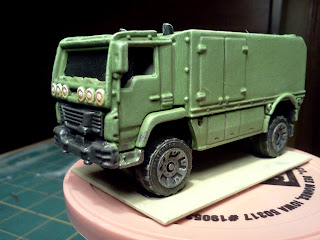 Decals and basing left to go. I need to find some new decals; those old GW Empire and IG decals only take me so far.
Posted by e-p at 9:47 AM No comments:

I haven't come up with a back story for these guys yet, because, well--they're space Nazis. That kind of sums them up, doesn't it. Eureka's Sci Fi Germans. Decent sculpts. Wish they're were some mortars only because my buddy's Khurasan Federals have them ans they kick my butt.

The paint scheme is super simple. In retrospect, too simple. But that's okay. What I really wanted to do with my first 15mm sci fi army was complete it. Which made me a little overzealous. I wish I would have painted some of the armor plates a different color. I wish I wouldn't have dipped them. But you know what? They're done and they look great on the table. 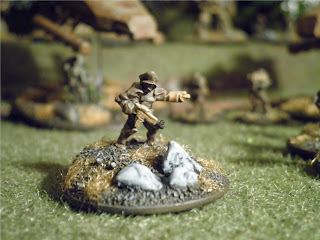 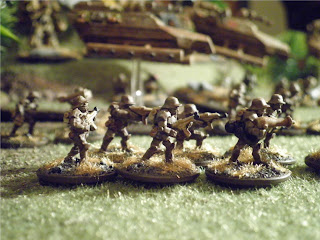 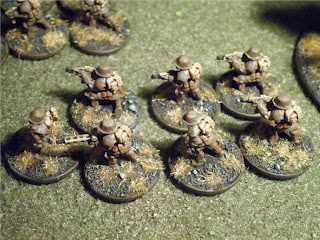 This army is designed for speed so all four squads and the commander arrive in Grav transports (or if google translate is to be believed "Antischwerkraft Träger" which sounds pretty cool). These started life as Plastic Soldier Company's SdKfz 251 Ausf D Halftrack. What a great deal! 5 models for around $30. It really has spoiled me when I go to look at other 15mm vehicle offerings. Anyway, WIP: 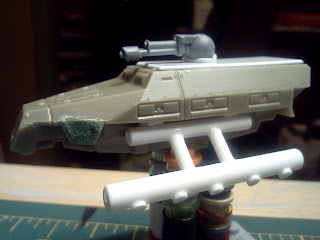 Just a little plastic tube for the anti-grav pontoons, some plasticard to cover the open top, and a lasgun from the GW Chimera kit along with other bits of course. 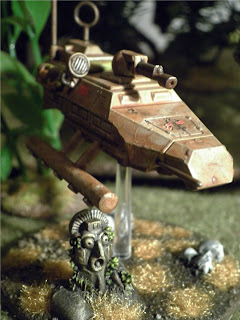 Again, not thrilled with the paint job, but good enough.

The scariest model in the army flanked by his little walker brethren: 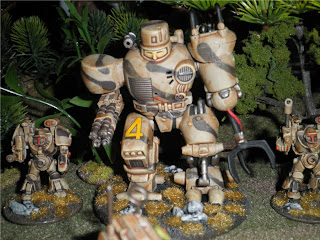 A pic for scale: 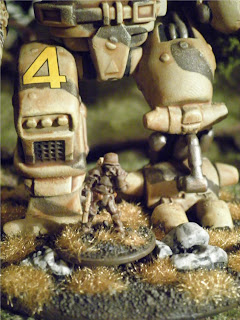 Last but not least, the whole shebang: 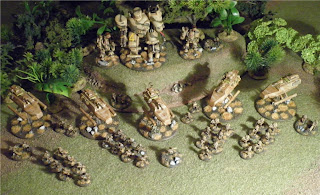 After playing wargames off and on for about twenty years, this is my first "finished" army. This is why I love 15mm so much. The army cost me around $70. Even if I never played a game with them I've already gotten $70 worth of entertainment out of them. But I've already played a few games with them. It's almost like I'm making money at this point. At least that's what I tell my wife.

Here they are. No new weathering techniques used after all other than throwing some different colors on the roofs which turned out okay. I like the green on the walls too. The pictures really make them much more garish than in real life. I threw lots of different flock on the bases, can't believe I've never done that before.

The paint scheme for the walls was another lesson in my patented "Let's Over Complicate Things" method. I base coated a mushroom color, highlighted cream, then pure white. Then I undid it all by washing with Devlan Mud. I like the effect but could have base coated cream, Devlan wash, then more highlighting. Oh well, live and learn.

I'm happy enough with these, they look suitably run down and most of the roofs have a low enough pitch that minis can stand up there for a better shot. Can't wait to game with them. 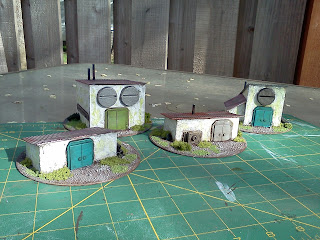 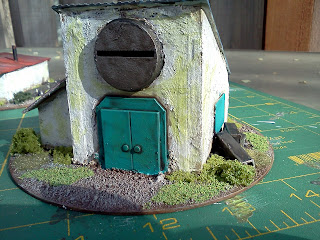 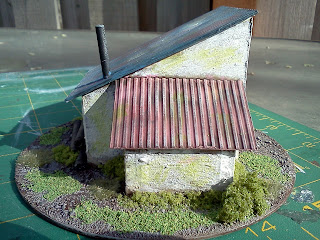 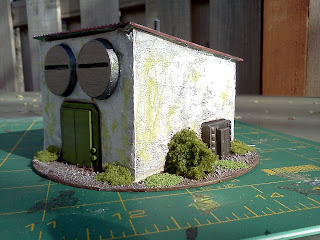 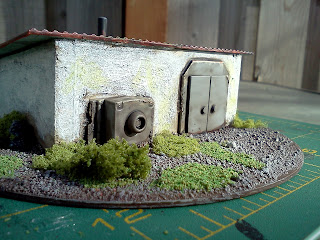 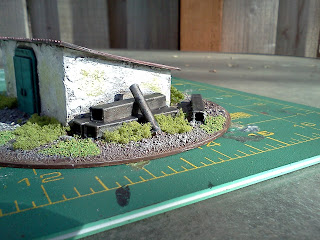 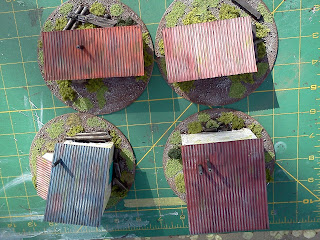 I don't like Yahoo! Groups. It seems every time I find a rule system I'm interested in and want to find out more about I run into Yahoo! Groups. Why? It's so unwieldy. What is this, 2002? What's wrong with a forum? They are so much easier to use. And it's not like forums are some new-fangled thing: they've been around for ten years.

I just don't get it.

I've had these sitting on my table for a while and just last night I got down to putting paint on them (I'll post the pics when they're done).

Super simple construction. Just four pieces of foamcore, corrugated plasticard for the roof, and some plasticard for the doors. I threw some junk and assorted doodads around to make them looked lived in. (Eureka 15mm Sci Fi German for scale.) I textured the walls with some light weight putty and they've since been sanded a little. The bases are all destroyed CDs and DVDs, one small benefit of working at a library.

I'm going to be trying some new weathering techniques on these little shanties. I've been reading about using pastels and think these are a perfect place to start. I really want them rundown and sad looking. All those poor settlers have to live somewhere, after all.

I'll backtrack and talk about getting into the 15mm sci fi world later. For my first post I want to talk about my most recent game. My buddy Chris and I took a day off from work this week and got out our newest painted minis. Chris used some figs from Khurasan's Spaceship Crew and the Sci Fi Hero and Spirited Sidekick. (Truth be told I am extremely jealous of these minis.)

I used some figs from Ground Zero Games. A Bot, a Robot, and three figs from their Firefly range Free Trader Crew. (I threw the pack of robots in at the last minute on a whim. So glad I did. My "BoxerBot9000" kicked some major butt and looked cool doing it.)

We had already played a few larger games with our "armies" using the Gruntz rules and wanted to try something small scale. My sister, bless her heart, bought me Blasters and Bulkheads for Christmas and I had been reading it and liking what I saw. But on game day we decided to stick with Gruntz and try to pull it back from squads to characters.

Here's what we did. We settled on 100 points and made each mini a specialist. This gave each character hit points, access to two perks, and a nice selection of weapons to choose from. In retrospect we realized we should have made our leaders up as commanders, it would have added another dynamic.

We used the Seize the Courier scenario from Blasters and Bulkheads. Each team is trying to nab a courier as he makes his way across the table to his small spacecraft. 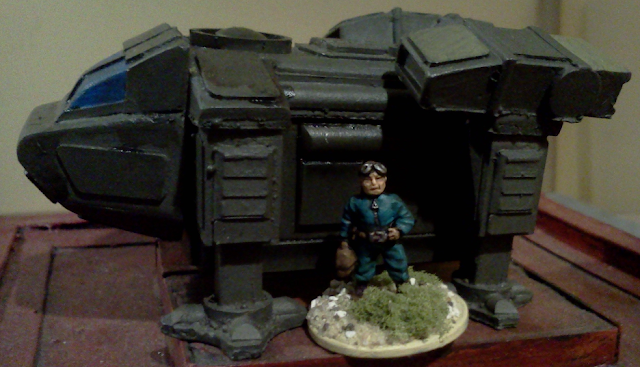 1 point for taking the courier, 1 point for getting his attache case. The game was a real nail biter. My guys grabbed the courier early on but took a beating in the process. Chris's guys would not let up and I finally had to drop the courier and make a run for it with the attache case. 1 point each and we both took two casualties.

It was a fun experiment and super easy to do with the Gruntz Excel army builder.

And finally, the obligatory apology for the crappy cell phone pics.
Posted by e-p at 8:15 PM 5 comments: