I got started on the AT-43 Karmans last night. And I think I might actually be done. Here's what I did.

Pretty pleased with how they came out. Especially since I didn't really have a plan when I sat down.

Tonight I'll work on cleaning any mold lines from the Kra'Vak and maybe even get them on pennies. 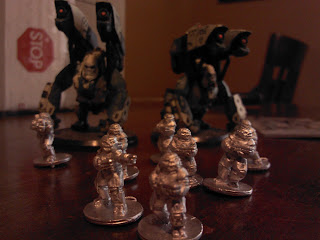 GZG Kra'Vak in the foreground, AT-43 Karmans in the background. Of course, now that I have 53 minis to work on, we're babysitting until late, maybe 11:00, which is prime hobby time for this dad. The only hobby time, really.

All was not lost, however. I popped the heads off the Karmans (the ones without nifty little domes), giant gorilla heads just don't seem to fit with the Kra'Vak. I found that a Bic pen is the exact diameter for the hole left by the missing head. I couldn't just cut those things willy-nilly which meant I had an excuse to break out my brand new mini miter box! It was quick work to get four new head pieces cut. All that while the girls were eating their cotton candy ice cream cones. Not bad.

Maybe I'll get the Kra'Vak cleaned up tonight. I kind of doubt it.
Posted by e-p at 8:16 PM No comments:

I'm nearly at the end of my GZG purchase. These last bots and drones mark the last of the minis. I have the vehicle painted, just need to finish basing it before I take some pictures.


I hope to get the GZG exploration vehicle done tomorrow and pics taken. I've also been working on some Hotwheels/Matchbox trucks that need their pictures taken. I'm in a slight rush because I took the plunge and bought my next batch of minis.

After all my hemming and hawing, I finally settled on a small Kra'Vak force. 4 squads of infantry, 2 squads of power armor, and one set of the beastly cavalry. I think it was Spacejacker's paint jobs that tipped the scales for me, just loverly.

I couldn't bring myself to buy the Kra'Vak vehicles, though. They are my least favorite of the GZG vehicles (still better than some other companies offer, mind you, just not my cup of tea). Instead I picked up 8 AT-43 Karmans to use as light mechs. I'll be decapitating the apes and armor plating the hole that leaves behind. Not sure how this is going to work as an army. I may end up needing some real tanks to fend off my buddy's numerous heavy tanks. And I don't have any transports. Oh well. They'll look cool! And they should be here by midweek. Yippee!
Posted by e-p at 8:41 PM 2 comments:

I am so close to getting all my Ground Zero Games minis painted right now I can taste it.

Here's what I've gotten done in the past few days.

I only have one bot, 5 wheeled drones, and the SURVEYOR II tracked ATV explorer vehicle left to go from my order. The joy this gives me is tempered with the knowledge I now have to choose my next purchase. I'm thinking about something rather alien, as all my current minis are human. So GZG's Crusties are on the table as are the Kra'Vak.  Micropanzer's Riavaui look pretty nice too. But I keep coming back to Zombiesmith's Quar. I first saw them years ago when I was playing 28mm. I loved them but couldn't bring myself to pony up that much money. Now that I'm doing 15mm they are super-tempting. Crusader: Light Infantry Company is packed with 58 minis for the ridiculously low price of $20. That's incredible! Couple with 3 or 5 Trencher Tank Mk2 from Proxie Models, that's a respectable army for around $50!

I'm just talking myself into it, even though they don't really fit in with the universe that is percolating in my mind. Maybe if I convince my buddy to pick up some Aphids...