Last night I did a little papercarft. I found http://www.toposolitario.com/workshop/ almost a year ago and have been thinking about trying one of their models for about as long. They have a dropship that I may try in the future but I thought I'd start with their smaller ship, the Chicharra (Cicada).

The model is 28mm scale so I reduced it to 65% and printed it on card stock.

Here she is. I think she's adorable. I just love that up-swept tail. 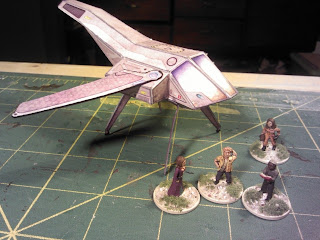 The Cicada will be a fun objective for small scale scenarios or just a nice bit of table dressing.
Posted by e-p at 7:02 PM 1 comment:

Yes sirree, I played a game this weekend with my Kra'Vak, renamed the Laju Kadal (which means fast lizard in Indonesian according to google translate). I was so excited to see my little guys on the field that tactics went right out the window, which, if I'm honest, they usually do. I am not the wisest general the table has ever seen but it was a fun game none the less.

We used the old Gruntz rules, even though we have the new rules. What we lack is the new Gruntz unit builder and I'm just too lazy to make a list up by hand anymore.

I got my good camera back and couldn't resist taking better pics of the Kra'Vak. Although now I face the daunting task of reshooting all the pics on the blog. (Probably not going to happen.)

But wait! There's more! I added flowers to the bases. So, not only are the new pics prettier, they're also prettier. 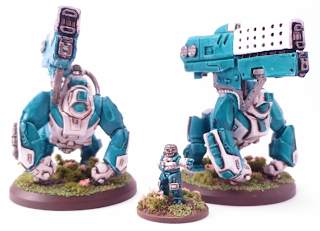 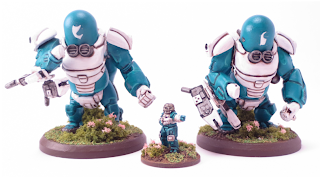 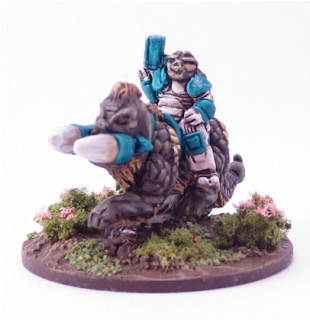 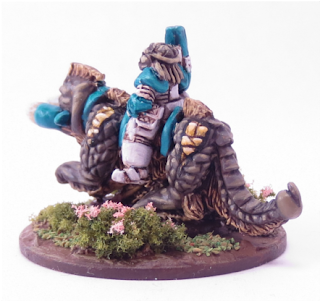 I've never used the flower flock before. I think it worked out pretty nicely. It also solved a problem for me. I was trying to think of how I was going to distinguish between squads. I thought about different colored dots on the shoulders or maybe different colors on the base edges  But because I alternated the blue and white on the squads the yellow and pink flowers take care of the issue for me.
Posted by e-p at 9:20 PM 7 comments:

Check out this awesome packaging from Oddzial Osmy.

These are my just arrived New Vistula Legion minis ordered through Pico Armor. Placed my order last Thursday and here there are on Tuesday. Nice.

But what has really impressed me is the ready-for-retail packaging that Oddzial Osmy uses. Makes me long to be able to walk into my FLGS and peruse the 15mm section. My only real miniature store in town used to carry Flames of War back when I couldn't be bothered with 15mm. But now that I wouldn't mind picking up some little Russians as an impulse buy they're nowhere to be seen.

Sigh. I suppose it's all for the best. I'd be pretty poor if I could walk into a store with all my favorite 15mm ranges.
Posted by e-p at 5:30 PM 1 comment: