Fanfare for the Common Crew

I am just in love with these sculpts. The level of detail is superb, even though they aren't swimming in it. Case in point, the baseball cap on the women: 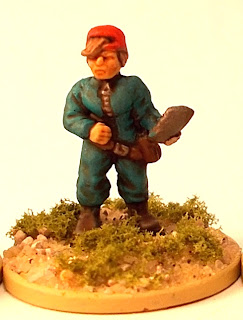 Such a nice touch. And those tiny little zipper pulls aren't too bad either.

These might see service as medics and engineers in some larger scale Gruntz games, but they'll definitely take part in some smaller, story based gaming.

Tonight it's all robots, all the time.

I made them into three squads. These will be used as specialists in Gruntz games and as nifty surveillance bots in small story based games.

Next up, GZG wheeled recon/surveillance drone: 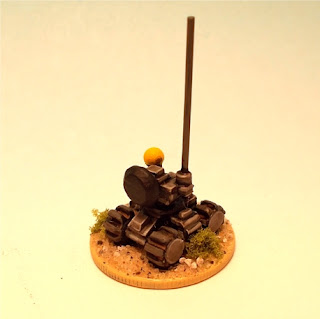 He's a cute little thing. I have two more of these guys and another three wheeled drones armed with missile launchers. He's mounted on a quarter, the fender washers were just too big for him. 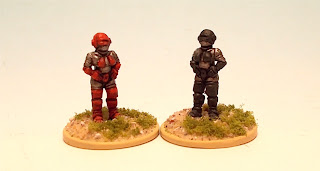 They're also GZG, from the Humanoid Bot pack. I slapped these together tonight. The paint job is, of course, ridiculous. They'll be close combat queens selling their services as sexy, robotic bodyguards.

Over Christmas I took my girls to the local zoo. We made our compulsory visit to the gift shop to buy the cheapest toy they have (miniature animals as it turns out [horrid rubbery things, useless for gaming]) and lo and behold, they had a tube of miniature trees on sale, 80% off. I bought one tube, not sure about scale. Took it home, tried it out, liked what I saw, drove back and cleaned them out.

These are made under the Toobs label. I've found their stuff at Michael's and Hobby Lobby too, but never for such a good deal. I ended up with 44 trees for about $12. Some sport autumn colors. I have those to my girls. I may take them back at some point if I feel like painting them. Thee others came in shades of green with brown trunks. They would have been fine to base out of the box but I had just finished my Space Nazis and thought, "I should dip these, they'd look so much better!" They do look a little better, but the extra work probably wasn't worth it, IMO. They're based on fender washers, puttied, sand-ed, and flocked. Blah blah blah preamble. 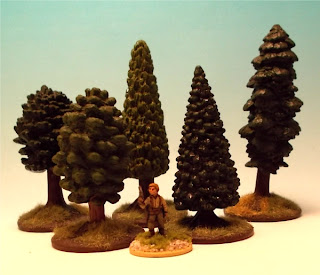 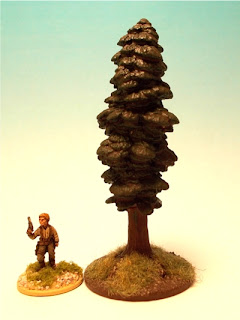 Now that I've taken nice photos of them, I can see that I need to get a little more matte varnish on them. We'll see. That probably isn't going to happen. They're serviceable as is. Maybe that should have been the title of this blog, "Serviceable As Is."
Posted by e-p at 2:05 PM 3 comments:

Better Pics of the GZG Ravagers

I slapped together a light box last night and took some better pics of the guys from yesterday, Nothing new here, just a tad bit of obsession.

It's been a while since I posted, but I have been working on minis. Here's the Ground Zero Games Reavers (both packs). 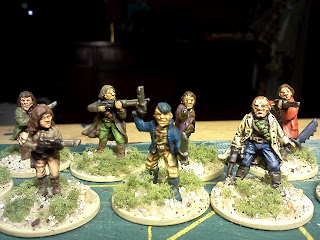 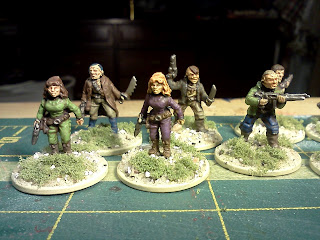 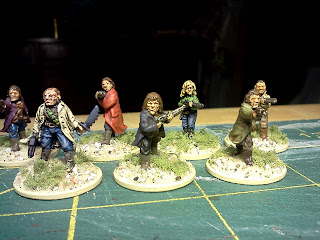 Two of these I painted up with some Devlan Mud wash and highlights. They look okay but they took waaaay too long. So for the remaining 14 I dipped them, and I don't feel bad. I'm pleased enough with the paint jobs.

These minis will probably be used in more story oriented games, maybe green squads for a Gruntz game vs my specialist starship crew. I'm also thinking about making a "movement tray" for them out of an old compact disc. Not so much for movement but for the extra cool idea from Blasters and Bulkheads: crowd terrain. I just love that idea, especially for some Mos Eisley inspired slum-running.

I've also finished my GZG gravbots but haven't taken any pics of them yet. I have the next seven days off though, so I hope to get a lot done.

It's been a while since I've posted anything. I haven't gotten a lot done since my last post but I did get a three Ground Zero Games Free Trader Crew minis painted. I really love these sculpts. The faces in particular are outstanding. 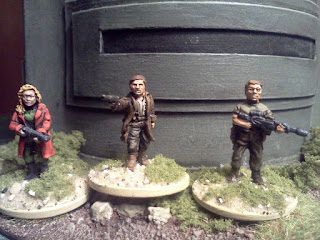 The building in the background is my other hobby achievement in the past few weeks, a comm bunker. 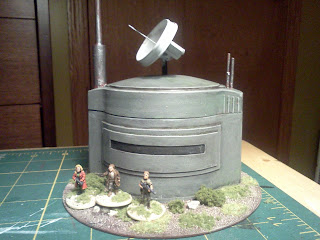 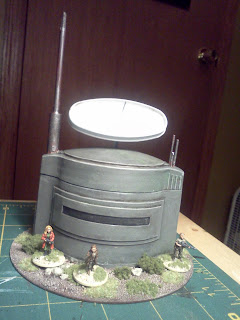 I rocked it old school with this one. The bunker is made from an Axe pomade container. I felt a little bit of a douche buying an Axe product but just look at it. A perfect gaming shape. The radar dish is the protective seal from a stick of deodorant. And lastly, that large aerial is my favorite: the stick from a prescription opiate sucker. I've had those sitting in my bitz drawer for six years. The window is cereal box card and the little aerials are brass rod.

I'm not really sold on the white dish, but the whole project took way too long as it is so it'll probably just stay white.

Feels good to get some stuff done, that's for sure.